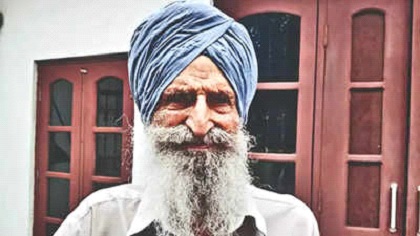 ISLAMABAD : The heart has its reasons. A 92-year-old native of Punjab who lost 22 members of his extended family to the carnage of Partition but never gave up hope of finding the missing 23rd is set to be reunited with his long-lost nephew at Gurdwara Kartarpur Sahib on Monday, 75 years since they last saw each other.

Mohan Singh, who was just 6 years old at the time, is now Abdul Khaliq, but neither passage of time nor the involuntary change in his identity would dim his uncle Sarwan Singh’s joy at this lost-and-found tale’s denouement.

Sarwan, settled in Canada with his son but living in Punjab since the pandemic struck, has two YouTubers on either side of the border to thank for tracing his nephew.

Harjit Singh of Punjab’s Jandiala, who has been documenting stories of Partition on YouTube, initiated the search for Mohan around eight months ago when he interviewed the latter’s uncle.

Five months after he posted the video, Pakistani YouTuber Mohd Javid Iqbal told the story of Khaliq as a child of Partition separated from his Hindu Khatri family. One of the nuggets of information highlighted in the interview was that Abdul had two thumbs in one hand.

Gurdev Singh Bath in Australia happened to see both videos and called me around 45 days ago to talk about Khaliq. Then Mohd Javid went to Khaliq while I visited Sarwan’s place. We arranged a video call,” Harjit said.

Sarwan asked Khaliq about the birthmark on his left thigh, which confirmed his identity. “They started talking to each other on their own af- ter that first video call, leading to the planned reunion at Gurdwara Kartarpur Sahib,” Harjit said.

Sarwan’s family used to live at Chak 37/12 L in the erstwhile Montgomery district of present-day Pakistan when the horrors of Partition struck. “My grandfather’s family had gone there from Pandori Nijhran village, which is now on this side of the border. Ours were the only houses of Sikh farmers in the village.

Our locality was called ‘Sikhan Wali Sainti’. Just before the riots started, I had gone to my eldest brother Udham Singh’s house in another village when all hell broke loose,” recalled the nonagenarian at his daughter Rashpal Kaur’s home at Sandham, about 35km from Jalandhar.

Sarwan, his brother and others embarked on a journey by cart to then East Punjab, little knowing the fate that befell Mohan and other members of the family. “It was only after reaching Adampur (near Jalandhar) that we came to know that 22 members of our extended family were killed. One of my cousins became so ill after hearing the news that he was hospitalised for a month,” he said.

“Later, a Christian woman, Nooran, who worked at our house, came and narrated the gory details of the massacre at our homes. She told me about my two sisters who jumped into the fire to end their lives, about the women of our families who threw the kids into the well and jumped in themselves to escape the rioters.

My mother had also jumped in but was pulled out before she drowned. Outside the well, she saw my brother dead and hugged his body, wailing. She refused to let the corpse go and was stabbed to death on the spot. My father, mother, a brother, his wife, and two sisters were among those who were killed,” he said.

While the ghosts of Partition continued to haunt him, Sarwan’s search for Mohan never ended. “I would even enquire from Pakistani Punjabis in Canada whether they knew of anyone matching my nephew’s description,” he said. “Some people interviewed me, but there were no leads. Then eight months ago, all of this happened. We have been talking to each other almost daily since. Mohan has also spoken to his sister Nirmal Kaur in Canada, and she will meet him in Pakistan soon.”