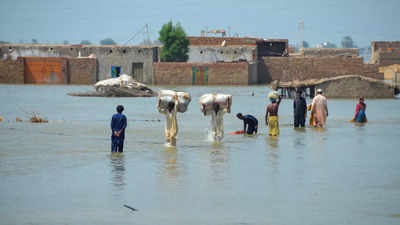 ISLAMABAD : Pakistan’s government will consult coalition partners and key stakeholders on importing food items from India due to shortages caused by the devastating floods, finance minister Miftah Ismail said on Wednesday amid criticism from the opposition over the plan in the wake of strained ties with New Delhi over the Kashmir issue.

The idea to import edible goods from India was first floated by Ismail on Monday, when the country’s death toll crossed 1,100 and hundreds of thousands of people were displaced, and thousands of acres of crops were destroyed due to flash floods that have wrought havoc across the country.

“More than one international agency has approached the government to allow them to bring food items from India through the land border. The government will take the decision to allow imports or not based on the supply shortage position, after consulting its coalition partners and key stakeholders,” Ismail tweeted.

Meanwhile, Pakistan has decided to import onions and tomatoes from Iran and Afghanistan in the wake of an impending food crisis triggered by the flash floods.

The rain-triggered flash floods have inundated one-third of the country and destroyed farmlands, causing a threat of shortages of vegetables and fruits along with uneven price hikes of some essential commodities.

The ministry of national food security and research also asked the Federal Board of Revenue to waive taxes and levies on onion and tomato imports for the next three months and expects that this will be made effective immediately. The measures are aimed at ensuring the supply of essential commodities in the market and stabilise prices, according to the ministry.

Earlier this week, Ismail indicated that the government might allow imports from India to stabilise soaring food prices.