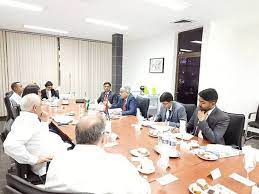 HAVANA: The 2nd round of Foreign Office Consultations (FOC) between India and Cuba were held in Havana on 27 June 2022. The Indian side was led by Shri Saurabh Kumar, Secretary (East) and the Cuban side was led by Ms. Anayansi Rodriguez Camejo, Vice Minister of Foreign Affairs.

During the FOC, both sides comprehensively reviewed the entire gamut of their bilateral relations, including development partnership projects, trade and economic relations, and cooperation in areas such as renewable energy, health including traditional medicine and yoga, biotechnology, agriculture, sports, health, science & technology and ICT. The two sides also exchanged views on regional and international issues of common interest including cooperation in the United Nations.

During the visit, an agreement on short-term credit worth Euro 100 million for procurement of rice from India for Cuba was signed and a Postal Stamp to commemorate 75 years of India’s Independence was released by the Government of Cuba.

The talks were held in a warm and friendly atmosphere.