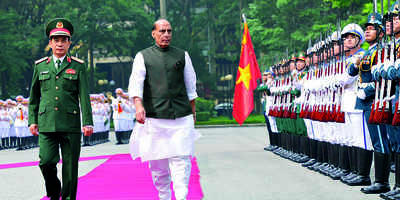 HANOI: India and Vietnam on Wednesday inked a “joint vision” document to “significantly enhance the scope and scale” of their bilateral defence ties by 2030, while also finalising a reciprocal logistics support pact to allow their militaries to use each other’s bases for repair and replenishment of supplies.

This came after extensive and “fruitful” talks between defence minister Rajnath Singh and his Vietnamese counterpart General Phan Van Giang at Hanoi, in the backdrop of both countries being wary of China’s aggressive and expansionist behaviour in Indo-Pacific region.

The close defence and security cooperation between India and Vietnam is an important factor for stability in the Indo-Pacific region, Singh said. The “wide-ranging discussions” focused on “effective and practical” initiatives to further expand bilateral engagements, with regional and global issues also figuring in the talks, the minister further stated.

The MoU on mutual logistics support is the first such major agreement that Vietnam has signed with any country. India, in turn, has such reciprocal logistics pact with several countries like the US, Australia, Japan, France, South Korea and Singapore.

“Both the ministers also agreed for early finalisation of the $500 million defence line of credit extended to Vietnam. India and Vietnam continue to have the most trustworthy relations in contemporary times with broader convergence of interests and common concerns,” a defence ministry official said.