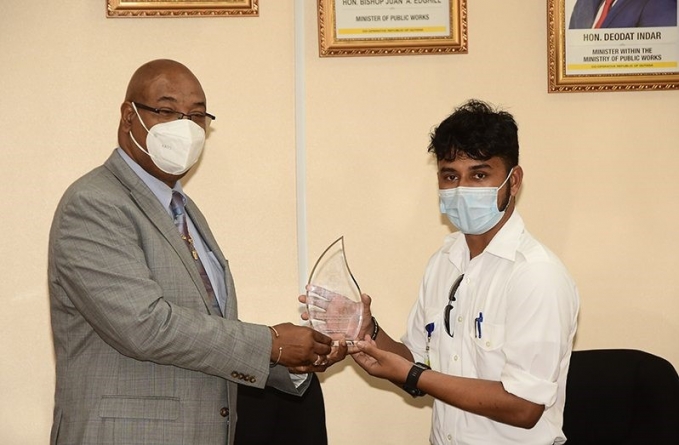 GEORGETOWN: Captain, Azam Ally, who created
history by being the first person to receive his training and certification in
Guyana. Previously, aspiring pilots had to secure helicopter training overseas.
On Wednesday, Ally’s historic achievements were honoured by way of a simple
ceremony hosted in the boardroom of the Ministry of Public Works, where he was
presented with his ‘license to fly’ by Senior subject Minister, Juan Edghill.
“I feel very honoured,” Ally said, upon receiving his certification. Reflecting
on his journey, Ally said that he had always admired the field of aviation, and
was determined to pursue it when he grew up. “Also, I always looked up to my
brother, who is just a year older than me. He is a pilot too, and I wanted to
follow in his footsteps,” Ally said.

Ally started his aviation career in
2019 as a trainee aircraft mechanic in the aircraft maintenance department of
Air Services Limited. After a successful stint, Ally was assigned to the
rotorcraft maintenance programme, which provided him with the foundational
knowledge of rotorcraft maintenance. In 2020, upon completion of one year in
maintenance, Ally was given the opportunity by Captain Mazahar Ally to begin
training as a helicopter pilot. His training commenced on August 3, under the
tutelage of Captain Buddy Chance, a veteran helicopter pilot, and one of two
approved helicopter flight instructors at Air Services Limited.

Ally successfully accumulated 50.2
hours of flying, 12.2 of which were done solo.

Ally’s next step is to pursue a
licence to fly helicopters for commercial purposes. Such trainings are not yet
offered in Guyana, and would have to be done overseas.