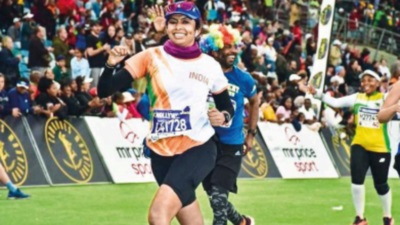 DURBAN : The journey of a thousand miles begins with a single step. Well, an ultramarathon surely does.
After stepping up her game quite literally for the last six years, Chennai gynaecologist Dr Erika Patel returned home earlier this week as the first woman from Tamil Nadu to have successfully completed one of the world’s longest and oldest marathons ‘Comrades’ in South Africa. Spanning an 89-kilometre stretch, it links the cities of Durban and Pietermaritzburg.

“I remember it in flashes,” says the 35-year-old mum of a boy. “I remember not using the playlist I had created, because the electric energy of the spectators was keeping me going.

“I remember video-calling my son and eating as I ran, so that I saved time.”

Erika, who used to play badminton for Gujarat, began running after she moved to Chennai post marriage. She started training for the Comrades marathon when she was pregnant with her son in 2019, continued until the week before he was born, following “an uncomplicated, healthy delivery,” and was back on track a week after.

“As a gynaecologist, I have been on a pursuit to bust the myths around working out while pregnant,” says Erika. “In the September of 2019 when I conceived, I was at the peak of my fitness curve. I decided that I would run by example to show that it wasn’t just possible, but that active women could avoid hypertension, excessive weight gain and radically increase the chances of a normal delivery.”

“Of course, for women who have been into fitness for a while before they became pregnant, this may be easier. Others can take slower, smaller steps,” adds Erika, who went on a 6K run on her 39th week, before she went into labour.

“As I ran, my groupmates from Chennai Runners were tracking me all day and cheering me on with messages. Around the finish line, I caught a glimpse of coach Parry, rushed in, hugged him and cried,” says Erika.

“I absolutely feel like this marathon has toughened me inside-out, to face anything with quiet calm and resilience. The runner’s high is real.”