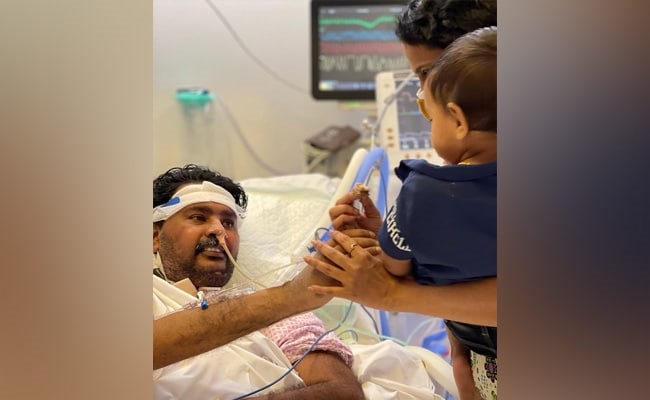 DUBAI: A 38-year-old Indian frontline warrior in the UAE was on Thursday discharged from hospital after he made a miraculous recovery from COVID-19 that seriously damaged his lungs and left him in an unconscious state for six months.

Arunkumar M Nair, an OT technician who fought the pandemic on the frontlines, breathed with the support of an artificial lung (ECMO machine) during his half-year-long battle against COVID-19.

During the period, he endured multiple complexities, including a cardiac arrest. He also underwent several procedures, such as tracheostomy and bronchoscopy.

In honour of his service to the nation and his fighting spirit, VPS Healthcare, a multinational healthcare group, presented him with a financial aid of ₹ 50 lakh.

His Emirati colleagues handed over him the financial assistance at a function organised at Burjeel Hospital in Abu Dhabi on Thursday to celebrate his miraculous recovery, according to a statement by the hospital.

The healthcare group will offer a job to his wife and will take up the expenses of the education of his child.

Nair, hailing from Kerala, was shifted to a general room in the hospital less than a month ago. For over five months, he was in the ICU on a life-support system.

“I do not remember anything. I know I had barely escaped from the jaws of death,” Mr Nair said.

“It is the strength of the prayers of my family, friends, and hundreds of others that I am alive today,” he said.

Mr Nair contracted COVID-19 in mid-July 2021 while working as part of the COVID-19 task force at LLH Hospital, Abu Dhabi. He has been working as an OT Technician at the hospital since 2013, the statement said.

After testing positive for COVID-19, Mr Nair moved to a quarantine facility but after a few days, his condition worsened and he was finding it difficult to breathe.

He was shifted to hospital and a thorough checkup found his lungs were severely infected. On July 31, the doctors put him on ECMO support as he could not breathe naturally. He came out of ECMO support after 118 days.

Mr Nair showed signs of improvement in the beginning and responded well to medication but gradually, the progress declined and his condition worsened.

He had not communicated about the illness to his family in India and had just informed them that he would not make any calls due to a special arrangement in the duty.

“We did not suspect anything wrong as he was working as part of the COVID-19 task force. But when we received the call from the hospital, we could not believe it,” said his wife, Jenny George, who is also a healthcare worker.

She secured a visa and travelled to Abu Dhabi to be with her husband.

“The news came as a huge blow for Arun’s parents and me. We were broken and prayed for his good health and speedy recovery,” she said, adding that he was planning to come home for housewarming in August.

Dr. Tarig Ali Mohamed Elhassan, Department head of cardiac surgery at Burjeel Hospital, who treated Nair since beginning, said his condition was critical from day one.

“His lungs had failed, and it was beyond repair. He was breathing only with the support of an ECMO machine. And this continued for about 118 days. In a normal case, the recovery would have been impossible. This is why Arun’s recovery is a miracle to all of us,” Mr Tarig said.

He will fly back to India with his family soon to visit his parents and continue his physiotherapy there. He is confident to join back on duty next month.