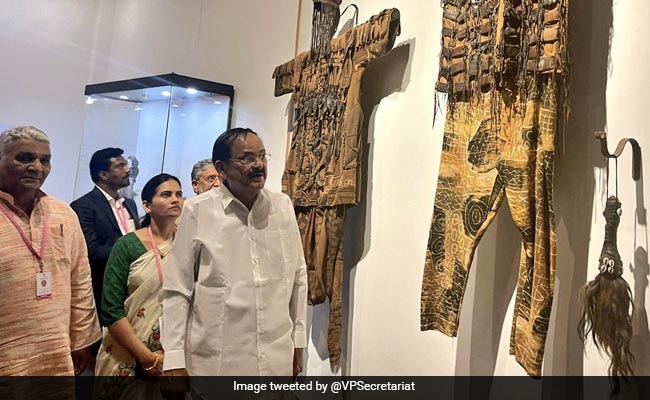 The museum is a repository of African art, culture and history and aims to highlight Africa’s cultural and scientific contributions to the world.

Mr Naidu is on his three-nation tour, visited the Monument of African Renaissance in Dakar, Senegal on Thursday.

The monumental structure made of bronze & copper stands tall at 52 meters and symbolises the ‘dignity of the African continent as well as its vision of a better future.

Complimenting Senegal for positioning itself as one of Africa’s model democracies, the Vice President said that India, as the world’s largest democracy, appreciates Senegal’s success in this regard. He further said that these shared values of democracy and secularism form the basis of warm and friendly relations between the two countries.

Vice President M. Venkaiah Naidu met the President of Senegal, Macky Sall, at the Presidential Palace in Dakar on Wednesday and reviewed the progress in the relationship between India and Senegal during the meeting.

Both the leaders agreed to further strengthen cooperation in various fields including agriculture, health, defence, railways, energy and culture.

Mr Naidu will be in Senegal from June 1 to June 3 and will be holding delegation-level talks with the President of the National Assembly Moustapha Niasse and other dignitaries, according to the Ministry of External Affairs.