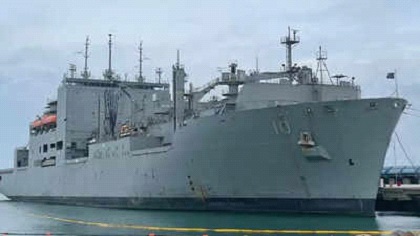 COLOMBO : As part of the ever-expanding bilateral defence and military ties, a US Navy warship has docked in India for the first time for repairs and allied services.

USNS Charles Drew, a cargo ship, arrived at the L&T shipyard at Kattupalli, Chennai for the 11-day repair work on Sunday. The development comes at a time when India and China are locked in the over two-year-long military confrontation in eastern Ladakh, which has shown no signs of de-escalation till now.

“This is the first-ever repair of a US Navy ship in India. The US Navy had awarded a contract to L&T’s shipyard at Kattupalli for undertaking maintenance of the ship,” a defence ministry official said.

India had offered the US “repair and maintenance” of its warships in the region during the ‘two-plus-two’ dialogue in Washington in April, stressing it would provide customised service in a cost-effective manner
.
Defence secretary Dr Ajay Kumar and Navy vice chief Vice Admiral SN Ghormade, among other top officials, visited the L&T shipyard to welcome USNS Charles Drew on Sunday.

US consul general in Chennai, Judith Ravin, and defence attaché Rear Admiral Michael Baker were also present during the occasion.

Terming the event as “a red-letter day” for the Indian shipbuilding industry and the Indo-US defence relationship, Kumar said, “We are indeed pleased to welcome US Navy ship to India for making her voyage ready. India’s initiative also assumes special significance in furthering the strategic partnership between India and the US. It marks the beginning of a new chapter for deeper engagements.”

“Today, India has six major shipyards with a turnover of nearly $2 billion. We are making ships not only for our own requirements. We have our own design house capable of making all kinds of state-of-the-art ships.,” he said.

With an eye on China, the defence secretary also mentioned that the India-US ties have been expanding in scale and scope, based as they are on “the common values and beliefs of an open, inclusive and rule-based order in Indo-Pacific and rest of the global common systems”.

There has been a tremendous amount of traction in the defence industry cooperation over the last couple of years between the two countries.

“Indian defence exports have seen a massive increase in the last four-five years. Exports, which were worth about Rs 1,500 crore in 2015-16, have now grown by 800% to around Rs 13,000 crore. A major destination for Indian exports is the US,” Kumar said.

US consul general Ravin called it a new chapter in the Indo-US strategic relationship, signifying the deepening bonds between the two nations.