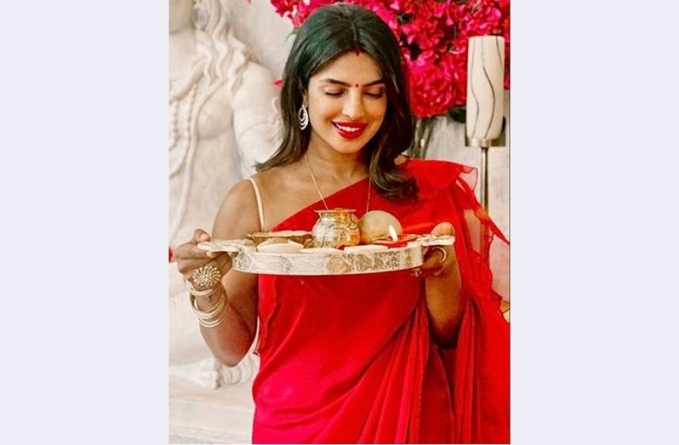 CALIFORNIA: Priyanka Chopra, known for breaking barriers and
stereotypes in the entertainment world, being one of the first Bollywood
actresses to embed her name in Hollywood, is all set to thrill her fans with
her new movie “We Can Be Heroes”, directed by Robert Rodriguez.
The plot revolves around the alien invaders who kidnap earth’s superheroes,
causing their children to team up and work together to save their parents and
the world.
The initial release date is fixed for December 25 and will be streaming on
Netflix on New Year’s Day. “Power comes in all sizes and it arrives on
Christmas Day! These amazing kids have a secret weapon – Teamwork,” Chopra said
in an Instagram post.
“So while you wait for Santa, it’s time to sit back and let these incredible
kids show you how to be a HERO! Are you in?” she continued.
“I had the best time shooting this movie, especially with Robert Rodriguez and
these amazing super kids!! Loved playing their nemesis…. who do you think is
going to win, them or me?!” the actress further posted.

Priyanka is also starring in “The
White Tiger” an upcoming drama film. From writer-director Ramin Bahrani, the
film is an adaptation of The New York Times Bestseller and the 2008 Man Booker
prize-winning novel by Aravind Adiga.
The film, which also stars Adarsh Gourav in his first lead role and Rajkummar
Rao, will release via Netflix on January 22, 2021.
Commenting on this film, Priyanka said: “You believe your destiny is what was
bred in you… till you find a way to break free. I’m so proud to be part of this
project.”
The former winner of the Miss World 2000 pageant, Chopra is one of India’s
highest-paid and most popular entertainers. She is working on yet another
project, her book titled “Unfinished” that is expected on February 9, 2021.
“I’ve loved writing for as long as I can remember. As a child I used to write
poetry and write in my diaries. There is something so healing and cathartic
when putting your emotions and ideas on paper,” Priyanka, also a singer and
film producer, has said publicly.

“Ironically, I named this memoir years
before I started writing it. Having been a public person now for 20 years, with
so much life to live and a long list of things to check off my list personally
and professionally, I am very much #Unfinished. BUT the funny thing about
writing a memoir is that it forces you to look at things differently,
reconciling so many things you thought you had put to bed. In doing so I’ve
realized that being ‘unfinished’ has deeper meaning for me, and has in fact
been one of the most common threads of my life,” the actress expressed.
She said over the past two decades, she was blessed to have had the opportunity
to write for various publications, with each piece slightly reflecting the
stages in her journey, opening up to the world a little more each time. ???
“I’m excited and nervous to let you in to my world more than I ever have before
with my book, #Unfinished. I can’t wait for you all to read it,” the actress
with almost 60 million Instagram followers said.