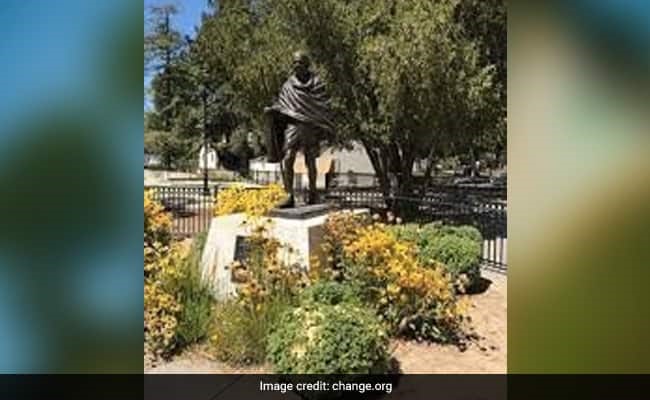 CALIFORNIA: Several Indian-American
organisations in US on Sunday strongly condemned the violent toppling of a
statue of Mahatma Gandhi in California and expressed hope that those
responsible for the despicable act will be brought to justice.

The 6-ft
tall, 650-pound (294 kg) bronze statue of Gandhi in the Central Park of the
City of Davis in Northern California was vandalised, broken and ripped from the
base by unknown people early this week.

“We
call upon the City of Davis to immediately commence a thorough process to bring
the perpetrators of this act to justice and reinstall a statue that pays homage
to this apostle of peace,” non-profit organisation Indiaspora said in a
statement.

“It
is especially ironic that the statue of a leader who was among the foremost
historical giants of non-violent civil protest was torn down in this
manner,” Indiaspora said.

In 2016,
the Davis City Council voted to proceed with the installation of Mahatma
Gandhi’s statue in the city’s Central Park.

The
statue of Gandhi, which was donated by the Indian government to the city of
Davis, was installed by the city council four years ago amid protests from
anti-Gandhi and anti-India organisations.

“Any
subsequent decision to the contrary, if at all, should have been arrived at via
non-violent and democratic means,” Indiaspora said.

“Mahatma
Gandhi, like many iconic figures who are globally revered for their leadership
in just and noble causes, was not a perfect man. But vandalising and
desecrating his statue is surely unacceptable in America, a nation that prides
itself on the peaceful and democratic resolution of differences of
opinion,” Indiaspora said.

Strongly condemning the
desecration and destruction of the Mahatma Gandhi statue in Davis’s town in
California, Indian National Overseas Congress (INOC) said that it is more
hurtful to see that the people who had done this despicable act on the eve of
January 30th, the day when Mahatma Gandhi paid the ultimate sacrifice for every
Indian’s freedom.

“We
are grateful to the City of Davis for starting a formal investigation and hope
that the perpetrators who have done this horrible deed will be found and
prosecuted to the full extent of the law,” INOC said. “

Mahatma
Gandhi was a champion of peaceful protests and vandalizing his statue would not
advance anyone’s political agenda. Still, it will only play into the hands of
those who want to bring polarization and division to our community,” it
said.

Indian
American Muslim Council said that the “heinous act has hurt the
sentiments”, not just of the Indian American community, but millions of
people in the United States who continue to be inspired by Mahatma Gandhi’s
struggle for peace, pluralism and justice.

In New
Delhi, the Ministry of External Affairs said the US Department of State has
conveyed that the act of vandalism is unacceptable and expressed the hope that
the perpetrators will be brought to justice as quickly as possible.