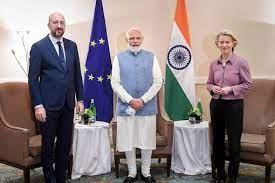 BRUSSELS: President of the European Commission, H.E. Ms. Ursula Von Der Leyen is on an official visit to India from 24-25 April 2022. This is her first visit to India as the President of the European Commission and is taking place as India and the EU are commemorating the 60th anniversary of diplomatic ties this year. President Von Der Leyen is the Chief Guest at this year’s Raisina Dialogue, where she delivered the inaugural address in the presence of Prime Minister.

President Von Der Leyen met with Prime Minister Modi, called on President Ram Nath Kovind and also had a meeting with External Affairs Minister Dr. S. Jaishankar today. Earlier in the day, she paid homage to the Father of the Nation at Rajghat.

During the bilateral talks, both sides reviewed the progress in implementing the India-EU Roadmap 2025 and the outcomes of the India-EU Leaders’ Meeting in May 2021. They welcomed the recent decision to formally restart negotiations on India-EU Trade and Investment Agreements by June 2022.

Both sides expressed hope in the early conclusion of negotiations for unlocking the full potential of bilateral trade and economic relations. They noted the strong synergies between India-EU Connectivity Partnership announced last year and EU’s new Global Gateway strategy and agreed to fast-track its implementation.

Emphasizing the need for closer cooperation on strategic aspects of emerging technologies and building trusted partnerships, Prime Minister Modi and President Von Der Leyen announced the establishment of an India-EU Trade and Technology Council. This new mechanism will bring about high-level coordination on the intersecting aspects of trade, technology and security and provide the political steer needed for in-depth strategic engagement.

They appreciated the ongoing cooperation in the digital sector including in areas such as Artificial Intelligence & 5G and welcomed the finalization of the Letter of Intent on High Performance Computing in COVID-19 drug research and climate modeling.

Both sides noted the increasing policy convergences on Indo-Pacific and exchanged views on other regional and global issues of mutual interest including cooperation in WTO, G20, Afghanistan and Myanmar.

Both sides expressed concern on the humanitarian situation in Ukraine and called for an immediate end to violence. Prime Minister Modi stressed the importance of giving peace a chance and the need to return to dialogue and diplomacy as the only way to achieve peace.

Prime Minister Modi and President Von Der Leyen also discussed the strong co-operation on climate and clean energy between the two sides. Prime Minister invited EU’s increased participation in the green energy sector in India with a focus on green hydrogen. Earlier during the visit, on 24 April, President Von Der Leyen visited TERI Gram (The Energy and Resources Institute) and the Secretariat of International Solar Alliance (ISA), in Gurugram.