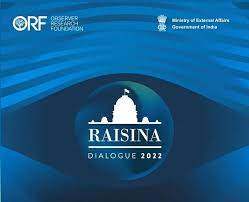 The Raisina Dialogue is India’s flagship conference on geopolitics and geoeconomics, held annually since 2016. It is organized by the Ministry of External Affairs in collaboration with the Observer Research Foundation (ORF).

Last year, the Dialogue was held in a virtual format due to exceptional circumstances necessitated by the Covid-19 pandemic. This year, the Dialogue is being held in an ‘in-person’ format. The organizers have taken all necessary measures to adhere to Covid-19 health protocols to ensure safe conduct of the Dialogue.

Prime Minister of India will inaugurate the Dialogue on 25 April. President of the European Commission, Ursula von der Leyen, will join the Inaugural Session as Chief Guest.

The theme for the 2022 Edition is “Terra Nova: Impassioned, Impatient, and Imperilled”. Over the course of three days, the Dialogue, will have panel discussions and conversations across multiple formats on six thematic pillars – (i) Rethinking Democracy: Trade, Tech and Ideology; (ii) End of Multilateralism: A Networked Global Order?; (iii) Water Caucuses: Turbulent Tides in the Indo-Pacific; (iv) Communities Inc.: First Responders to Health, Development, and Planet; (v) Achieving Green Transitions: Common Imperative, Diverging Realities; and (vi) Samson vs Goliath: The Persistent and Relentless Tech Wars

This year, Raisina Dialogue side-events will be hosted in Berlin and Washington D.C. The Raisina Young Fellows programme will be also be conducted on the sidelines of the main conference.

The 2022 Edition will have over 100 sessions with over 210 speakers from more than 90 countries and multilateral organisations. A large audience is also likely to join the Dialogue across various social media platforms.

In the past seven years, the Raisina Dialogue has grown in stature and profile to emerge as a leading global conference on international affairs. It attracts prominent thought leaders from the global strategic and policy-making community to discuss key geopolitical developments and strategic issues facing the world.