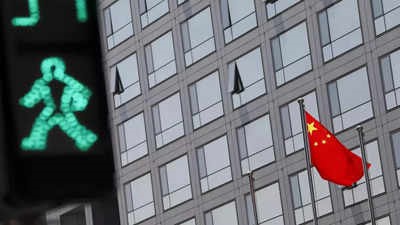 BEIJING: A growing list of risks is turning China into a potential quagmire for global investors.
The central question is what could happen in a country willing to go to great lengths to achieve its leader’s goals. President Xi Jinping’s friendship with Russian leader Vladimir Putin has made investors more distrustful of China, while a strongman narrative is gaining momentum as the Communist Party doggedly pursues a Covid-Zero strategy and unpredictable campaigns to regulate entire industries.

As a result, some international investors are finding an aggressive allocation to China increasingly unpalatable. Outflows from the country’s stocks, bonds and mutual funds accelerated after Russia’s invasion of Ukraine, while Norway’s $1.3 trillion sovereign wealth fund has snubbed a Chinese sportswear giant due to concerns about human-rights abuses. US dollar private-equity funds that invest in China raised just $1.4 billion in the first quarter — the lowest figure since 2018 for the same period. 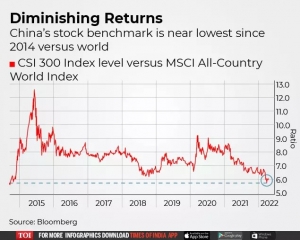 “Politics and governance factors should now set a cautious tone, especially for long-term commitments” to China, said Edelsten, adding that European measures taken against Russia show that strong trade ties are no guarantee of diplomatic security.

“The Ukraine invasion raises these risks very sharply and our funds are likely to remain very lowly weighted in China for some years to come,” he added. 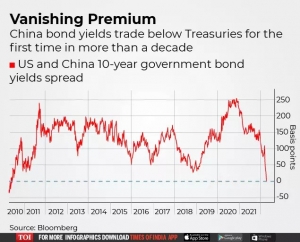 Beijing’s regulatory actions “felt like an attack on the most respected and widely foreign-held companies,” he said, while sanctions on Russia raised concern the same could happen to China. His firm — which manages China-focused exchange-traded funds — is replacing US-listed Chinese stocks with those trading in Hong Kong to reduce risk.

Making money in China’s public markets has become more difficult. The CSI 300 Index of stocks is down about 15% year-to-date and its risk-adjusted return — as measured by the Sharpe ratio — is among the lowest globally, at minus 2.1. That’s only slightly better than Sri Lanka’s Colombo All-Share Index. The Chinese index is trading near the lowest level since 2014 relative to MSCI Inc.’s global stock gauge.

For the first time since 2010, Chinese benchmark sovereign 10-year notes offer no carry over comparable US Treasuries. And returns in China’s high-yield dollar credit market were the worst in at least a decade last quarter.

Global funds have started to pull out, selling more than $7 billion worth of mainland-listed stocks via exchange links with Hong Kong in March. They also disposed of $14 billion in Chinese government debt over the past two months and trimmed their credit holdings. Betting against China was considered the fifth most-crowded trade in Bank of America Corp.’s most recent survey of investors.

“Markets are worried about China’s ties to Russia — it’s scaring investors and you can see that risk aversion playing out since the start of the invasion,” said Stephen Innes, managing partner at SPI Asset Management. “Everyone was selling China bonds so we’re glad we didn’t buy any.”

Still, divesting from China may not be a straightforward choice. The world’s second-largest economy possesses a $21 trillion bond market and equity bourses valued at $16.4 trillion onshore and in Hong Kong. Its assets offer diversification for investors, Amundi Singapore Ltd.’s head of investment Joevin Teo said last week, with multi-asset strategies struggling under the threat of inflation and tightening global financial conditions. Some have even called Chinese assets a haven.

“It’s one of the best diversification stories for global funds because of its idiosyncratic nature,” said Lin Jing Leong, senior emerging market Asia sovereign analyst at Columbia Threadneedle Investments, which manages about $754 billion. “Who owns the market, the cycle of China’s growth and inflationary pressures, the low volatility in its currency basket” all help to provide better risk-adjusted returns, she added.
Chinese authorities appear to be taking steps to appeal to global funds. Regulators last month promised to ensure policies are more transparent and predictable — key sticking points for investors who lost trillions of dollars in 2021 due to Beijing’s crackdown on tech and tutoring firms. China is also making compromises that may grant American regulators partial access to audits of US-listed Chinese companies.

While Wall Street giants such as JPMorgan Chase & Co. and Goldman Sachs Group Inc. are rushing to take full ownership of their China ventures, some companies are divesting.

In March, Germany’s Fraport AG sold its stake in Xi’an Airport to a local buyer, ending a 14-year stint in China. The airport operator said it decided to exit the Chinese market after struggling to expand its business. Fraport also owns a share of St. Petersburg airport in Russia, which it’s currently unable to sell.

Others are preparing for China’s decoupling from the West. Self-driving technology startup TuSimple Inc. is considering spinning its China operations off into a separate entity, following American authorities’ concerns over Beijing’s access to its data. Oil giant Cnooc Ltd. may exit operations in the U.K., Canada and the US due to concerns the assets could be subject to sanctions, Reuters reported last week.

Investment professionals at one American private equity fund in Hong Kong aren’t pursuing opportunities in China as aggressively as before even though prices are far lower, according to a person who asked not to be named discussing internal strategies. Concerns include the difficulty of exiting investments and problems that may arise from a hardening of positions such as U.S. investment bans or a consumer boycott of made-in-China products.

As risks increase and rewards diminish, adding exposure to China may no longer be a no-brainer for global investors. In a speech last week, US Treasury Secretary Janet Yellen called Beijing to account for its ever-closer relationship with Moscow.

“The world’s attitude towards China and its willingness to embrace further economic integration may well be affected by China’s reaction to our call for resolute action on Russia,” she said.