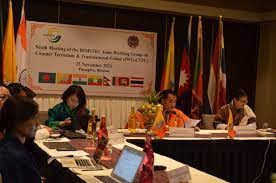 The meeting discussed emerging traditional and non-traditional security threats in the BIMSTEC region. The Indian delegation highlighted threats emanating from cross-border terrorism from terrorist groups such as LeT, JeM, HM etc. and transnational organized crime such as drug trafficking, illegal weapons smuggling etc. The meeting deliberated and made recommendations on wide ranging issues to enhance cooperation and collaboration in countering terrorism and transnational crimes in the region.

The meeting also discussed modalities for implementation of the BIMSTEC Convention on Cooperation in Combating International Terrorism, Transnational Organized Crime and Illicit Drug Trafficking, which entered into force on 16 March 2021 upon ratification by all Member States.

India would be hosting the tenth Meeting of the BIMSTEC Joint Working Group on Counter Terrorism and Transnational Crimes (JWG-CTTC) in 2022.