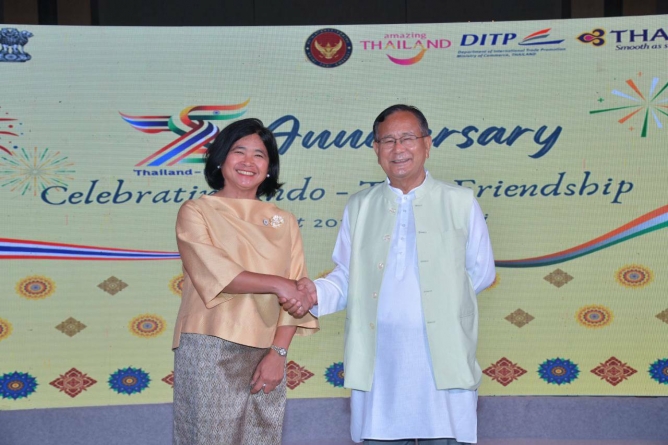 BANGKOK : Minister of State for External Affairs, Dr. Rajkumar Ranjan Singh was the Chief Guest at an event organised by the Royal Thai Embassy in India on the occasion of the 75th anniversary of establishment of diplomatic relations between India and Thailand on 01 August 2022. While addressing the gathering, the Hon’ble Minister expressed his satisfaction and pleasure about the strong bilateral relations between both countries. The Minister also expressed his joy that these celebrations coincided with the 75th anniversary of India’s Independence Azadi ka Amrit Mahotsav (AKAM). The Minister also spoke about his recent visit to Thailand for the 2nd edition of the North-East India Festival from 29-31 July 2022 which is expected to open up substantial business opportunities for North-East Indian business community especially in the tourism, agro and food processing sectors.

Thereafter, a short film commemmorationg the 75th Anniversary of the bilateral relations and a promotion film on “Amazing New Chapter : Responsible Tourism in Thailand” were released during the event, which were followed by cultural performances by Thai troupes and remarks by the Deputy Governor of the Tourism Authority of Thaland, Mr. Thanet Petchsuwan and the Ambassador of Kingdom of Thailand to India, H.E. Mr. Pattarat Hongtong.

The event concluded successfully, highlighting the warm relationship between India and Thailand with avenues for greater co-operation in various fields.