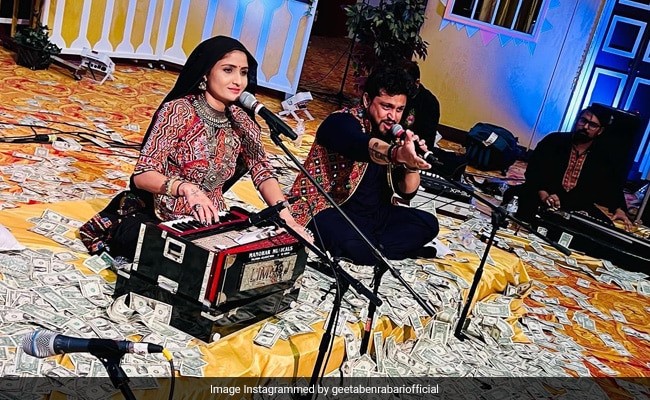 ATLANTA: Since the day Russia launched its invasion on February 24, people across the world have been doing their bit to help people of Ukraine. The Non-Resident Indians (NRIs) living in the United States have also pitched in.

The Gujarati NRIs organised an event in Atlanta, Georgia, on Sunday where folk singer Gitaben Rabari gave a performance to raise funds for the Ukrainians.

The video of the event went viral on social media, with dollars raining down on Rabari.

The event was organised by Surat Leuva Patel Samaj (SLPS) and the organisers raised $300,000 (Rs 2.25 crore) for the people of Ukraine.

The post has been viewed thousands of times on Instagram and other social media platforms. Users appreciated the efforts of the singer and the NRI community to help Ukraine.

“Great work,” a Facebook user posted. On Instagram, one of the users commented: “Really proud of you dii.”

The 26-year-old singer has had several popular music albums to her credit and known for giving live performances in Gujarat and abroad.

Ms Rabari had in February 2020 performed at the “Namaste Trump” event held at the Narendra Modi stadium in Ahmedabad before Prime Minister Narendra Modi and then US President Donald Trump.

Meanwhile, Ukraine’s President Volodymyr Zelensky said on Sunday that many Russian businessmen have offered to help the country. During an interview, Zelensky said the businessmen had told him they wanted to “do something” and “help somehow” to de-escalate Russia’s now month-long military assault on Ukraine.

Western countries including the United States and the EU have imposed unprecedented sanctions against Russia over its invasion of Ukraine, including placing oligarchs and other individuals close to Putin on sanctions lists.