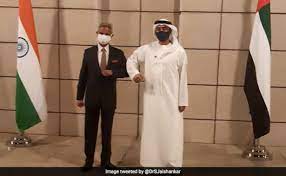 The UAE Foreign Minister shared the details of the attack with EAM. He conveyed the deepest condolences of the UAE Government on the death of two Indians. He assured that the UAE Government would extend the fullest support to the families of the deceased. His authorities are in continuous touch with the Indian Embassy in that regard.

On his part, EAM condemned the terror attack in the strongest terms. He emphasized that in this day and age, such an attack on innocent civilians was completely unacceptable and against all civilized norms. EAM appreciated the immediate assistance provided by UAE authorities to the Embassy in responding to this tragic situation.

EAM conveyed India’s strong solidarity with UAE in the face of such an attack. Given its principled position against terrorism, India will stand with UAE in international forums on this issue.

The Ministry of External Affairs is in contact with the Indian Embassy in Abu Dhabi regarding the return to India of the mortal remains of the deceased. The Embassy is coordinating with the families. They have also rendered all necessary assistance to those who sustained injuries.