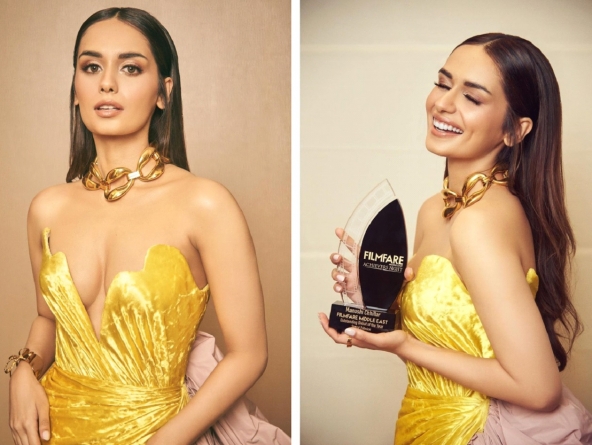 ABU DHABI : The former Miss World, who keeps making the headlines for all good reason, has once again topped the charts as she was recognized with an award at the ‘Filmfare Middle East Achievers Night 2022’.

Manushi, who finally marked her Bollywood debut with Samrat Prithviraj opposite Akshay Kumar, received the ‘Outstanding Debut of the Year’ award. The queen, thrilled with her victory, took to Instagram to announce the news through an emotional post captioned, “Debut films are special, but winning awards for your debut film is an even more special feeling! Thank you, @filmfareme, for validating my effort as an actor in #SamratPrithviraj and for honouring me with the ‘Outstanding Debut of the Year’ award! Promise to work harder in every film that I do and try and win all the love that I can get from here on… 🙏”

Many iconic figures were present on a starry night and looked their glamorous best. For the event, Manushi adorned a striking yellow and pink velvet gown with a puffy bow and train by designer Laith Maalouf. Last year at the same event Manushi was felicitated with the ‘Social Good’ Award for her Beauty with a Purpose (BWAP) Project Shakti.

Following her spectacular performance, Manushi has bagged two other films, including Tehran opposite John Abraham and The Great Indian Family alongside Vicky Kaushal.