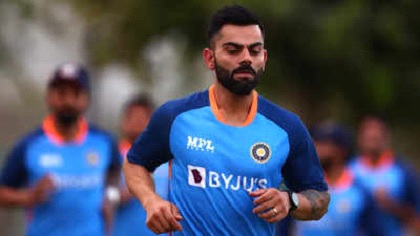 ABU DHABI : When India take field to play archrivals Pakistan in Dubai on Sunday to start their Asia Cup 2022 campaign, star batter Virat Kohli will represent the country in his 100th T20I match, becoming the first Indian player to feature in hundred or more matches in each format of the game internationally.

Kohli stepped down from the T20I captaincy last year and was later relieved from his captaincy duties in the ODIs and Tests as well, as Rohit Sharma took over the team’s command.
Congratulations!
You have successfully cast your vote

Virat Kohli needs to score runs not only for India but for himself: Sourav Ganguly

Beating Pakistan and playing a match-winning knock on Sunday will be on Kohli’s mind.

The last time these two teams met was at the last T20 World Cup, where India were handed a humiliating 10-wicket defeat under Kohli’s captaincy. Kohli scored 57 off 49 balls in that match and took India to 151/7 in 20 overs, but Pakistan openers Mohammed Rizwan (79*) and Babar Azam (68*) outshined the Kohli-led side with ease.

Asia Cup is being held in T20I format from August 27 to September 11.