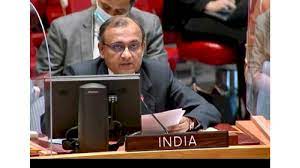 ABU DHABI: The first round of India-UAE UN consultations at Director General (DG) level were held in Abu Dhabi on 26 April. The Indian delegation was led by Shri Prakash Gupta, Joint Secretary (UN- Political) along with officials from the Embassy of India in Abu Dhabi, while the UAE delegation was led by Ms. Ahood Al Zaabi, Director of the United Nations Department of the UAE Ministry of Foreign Affairs & International Cooperation.

Both sides exchanged views on areas of priority during their ongoing UNSC tenure. In keeping with their Comprehensive Strategic Partnership, they agreed to work closely together on key issues on the UNSC agenda, in particular on their shared commitment to reformed multilateralism and counter-terrorism.

India also congratulated UAE on its successful Presidency of the UNSC in March 2022. Both sides welcomed their convergences and mutual support on multilateral issues.