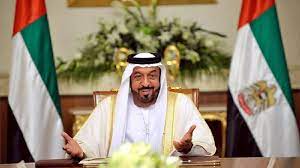 ABU DHABI: Government of India has declared one-day national mourning tomorrow, 14 May 2022, as a mark of respect to His Highness Sheikh Khalifa bin Zayed Al Nahyan, the President of the UAE and Ruler of Abu Dhabi who passed away today. The National Flag will be flown at half-mast on the day of mourning throughout India on all buildings where the National Flag is flown regularly and there will be no official entertainment on the day.

President of India Shri Ram Nath Kovind and Prime Minister of India Shri Narendra Modi have also expressed condolences at the demise of HH Sheikh Khalifa bin Zayed Al Nahyan. In their messages, they noted that he was a statesman and a visionary leader and recalled his contribution to the strengthening of India-UAE bilateral relations and the welfare of the Indian community in UAE.