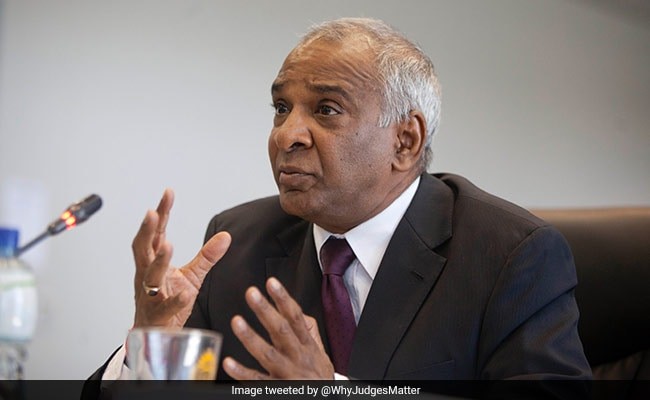 JOHANNESBURG: Narandran ‘Jody’ Kollapen, who is Indian origin, has been appointed to South Africa’s highest judicial bench, the Constitutional Court.

President Cyril Ramaphosa on recently announced the appointment of 64-year-old Kollapen and Rammaka Steven Mathopo as the latest additions to the Constitutional Court after a lengthy process of public interviews.

Kollapen and Mathopo were among the five candidates recommended to Ramaphosa in October this year for the two vacancies.

Kollapen was interviewed twice before for appointment to the Constitutional Court but was unsuccessful then despite having served two terms as an acting judge of the same institution.

The Presidency said Kollapen and Mathopo have illustrious careers in the legal profession and the judiciary.

Kollapen, who has now been elevated from his position as a judge of the high court, started legal practice in 1982, focussing largely on public interest work. He joined Lawyers for Human Rights in 1993 and went on to become its national director in 1995, serving in that position until the end of 1996.

Kollapen serves on the structures of numerous NGOs and community-based organisations, including the Legal Resources Centre, the Foundation for Human Rights and Laudium Care Services for the Aged.

He has also been invited to speak on human rights issues across the world, including at the United Nations and Harvard University.

He was awarded an honorary doctorate by the Durban University of Technology; the Turquoise Harmony Institute’s award for his contribution to society in the area of law and human rights; and a Lifetime Achievement Award by the Congress of Business and Economics, which was born out of the erstwhile Transvaal Indian Congress from the days when Mahatma Gandhi was in South Africa.

In 2010, while in the position of acting Constitutional Court judge, Kollapen made a strong statement about cultural and national identity as the keynote speaker at the 50th anniversary celebrations of the religious organisation Siva Gnana Sabhay in Lenasia.

Kollapen said there was no need to shy away from the unique Indian identity, culture and religion brought to South Africa by the first indentured labourers 150 years earlier, but that South Africans of Indian-origin should use this to help build the rainbow nation as citizens of the country.

Kollapen’s mother was among the women in the historic protest march to the Union Buildings in Pretoria, the seat of the apartheid-era government, in 1956 to protest discriminatory laws. She was arrested and jailed twice for her participation in passive resistance protests.

Kollapen often recalled how his mother had told him that she was pregnant with him at the time.