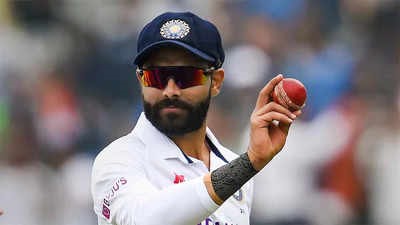 DUBAI: India’s Ravindra Jadeja climbed to the top spot in the ICC Test rankings for all-rounders on Wednesday after his match-winning performance against Sri Lanka in the opening Test in Mohali.

“Ravindra Jadeja’s performance at India’s recent Test win against Sri Lanka in Mohali has catapulted him to the no. 1 position in the MRF Tyres ICC Men’s Test Player Rankings,” the ICC said in a statement.

His unbeaten 175 lifted him up to 17 places from 54th to 37th with the bat and he added nine wickets to move up to 17th with the ball.

His all-round contribution was enough for him to regain the top all-rounder spot from Jason Holder, who had held the position since February 2021.

Jadeja’s only previous time on top was in August 2017, when he spent a week at number one.

Jadeja was named player of the match for his show against Sri Lanka in Mohali, where India triumphed under three days by an innings and 222 runs.

In the same list, Ravichandran Ashwin dropped a rung to third while Axar Patel was next best Indian at 14th, after going down two positions. Patel did not play the Mohali Test due to injury.

Among batters, Virat Kohli rose two spots to be fifth in the latest list, followed by India skipper Rohit Sharma static at sixth.

Rishabh Pant, who impressed with an explosive 96-run knock in Mohali, entered the top 10 at 10th after gaining one spot.