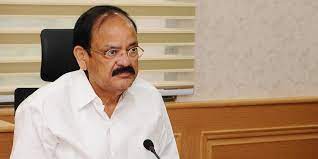 COLOMBO: Vice President Venkaiah Naidu congratulated IIT Madras for bringing out science and technology magazine ‘Shaastra’, saying it will benefit those keen on knowing the latest developments in the world of science and innovation. The magazine addresses a mass audience and articulates not just Indian but global trends.

Supported by 50,000 alumni of IIT Madras, ‘Shaastra’ is intended to serve as a platform to showcase sterling achievements in science, technology and innovation in India and abroad, to enable informed conversations between industry, academia, and policymakers.

“I compliment IIT-Madras for bringing out ‘Shaastra’, a science and technology magazine. It is a good initiative as the magazine will not only benefit the scientific community but also those who are keen on knowing about the latest developments in the world of science and innovation,” Naidu tweeted.

Mahesh Panchagnula, Dean (Alumni and Corporate Relations), IIT Madras, said, “Shastraa is an IIT-Madras offering to the nation. As a platform for conversations to happen between students, policymakers, engineers, scientists, professors and corporate leaders of India. We hope this will become a catalyst for the country to embrace technology at all levels.”