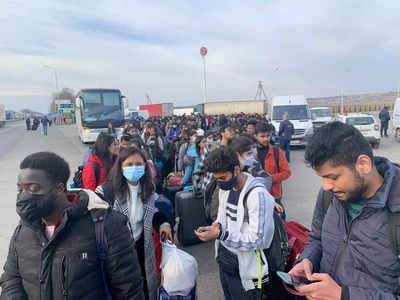 BUCHAREST: Indian officials grappled with a complex situation on the ground in Ukraine as they raced to get Indian nationals towards exit routes in the western part of the country, with more than 470 students being escorted across the border to Romania on Friday.

The “predicament of Indian nationals” figured in a phone conversation between external affairs minister S Jaishankar and his Ukrainian counterpart Dmytro Kuleba. Jaishankar tweeted that he discussed the matter with Kuleba and appreciated his “support for their safe return”.

People familiar with the matter said the situation became more complicated with fighting between Russian and Ukrainian forces moving to the capital Kyiv. Russian troops entered the northern districts of Kyiv on Friday after the city was hit by missiles. CNN cited US intelligence officials as saying Kyiv could fall within days.

Kuleba shared his assessment of the current situation during the call he made to Jaishankar, who emphasised that India supports diplomacy and dialogue as the way out.

The Indian embassy in Kyiv said in a tweet that more than 470 students will exit Ukraine and enter Romania through the Porubne-Siret border crossing. “We are moving Indians located at the border to neighbouring countries for onward evacuation,” the embassy said.

“Efforts are underway to relocate Indians coming from the hinterland,” the mission added.

The people cited above said India’s primary focus remained the safety and evacuation of some 16,000 nationals, most of them students. Officials are also dealing with a range of issues, such as obtaining visas for the Indians, and taking care of matters related to vaccination certificates.

The external affairs ministry set up camp offices at Lviv, 70 km from the border with Poland, and Chernivtsi, located near the border with Romania. Additional Russian-speaking officials were sent to the camp offices to facilitate the departure of Indians reaching the two cities.

Due to the closure of Ukrainian airspace, the Indian government organised charter flights to the neighbouring countries to evacuate Indians, and two flights were set to reach the Romanian capital of Bucharest early on Saturday. The full cost for the evacuation will be borne by the government, the people said.

An advisory issued by the Indian embassy said teams of Indian officials were in place at the Chop-Zahony checkpoint on the border with Hungary and at the Porubne-Siret checkpoint on the frontier with Romania. Officials said teams were also in place at the Shehyni-Medyka and Krakowiec border crossings in Poland and Vysne Nemecke border crossing in Slovakia.

Indian nationals have been advised to print Indian flags and paste them “prominently on vehicles and buses while travelling”, and carry their passports, cash for emergency expenses, and Covid-19 vaccination certificates.

“In this difficult situation, the Embassy of India requests Indians to continue to remain strong, safe and alert,” the advisory said.

Indian nationals, especially students living closest to the Hungarian and Romanian borders, were “advised to depart first in an organised manner, in coordination with teams from Ministry of External Affairs”. Indians using their own transport arrangements were asked to proceed to the two border checkpoints and remain in touch with helpline numbers for facilitation at the frontier.

There were also reports on dozens of Indian students taking refuge in bomb shelters at places such as Kharkiv city in northeast Ukraine.