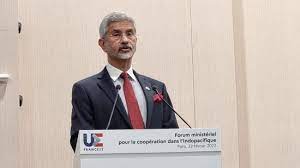 BRUSSELS: External Affairs Minister, Dr S. Jaishankar visited to France on February 20-23, 2022 where he participated in the EU Ministerial Forum for Cooperation in the Indo-Pacific, organised by France as part of its Presidency of the EU Council.

During his remarks, Dr Jaishankar spoke about the common challenges and potential areas of cooperation between Europe and the Indo-Pacific, highlighing France’s key role in this respect. He also announced the Indo-French initiative on the “Indo-Pacific Parks Partnership”, along with Mr Le Drian, which aims to build capacities in the Indo-Pacific region, in terms of sustainable management of protected areas, by gathering and sharing the experiences and expertise that exist in the Region among key Indo-Pacific public & private natural park managers.

The Forum was organised around three Round Tables where all the participants discussed key issues of common concern. Discussions during the meeting identified ideas and avenues for cooperation between the EU and its Indopacific partners in the light of the recently adopted EU Indopacific Strategy and Global Gateway Strategy. These Round Tables focused on the themes of 1.) Security and Defence, 2.) Connectivity and Digital Issues, and 3.) Global Challenges: Climate, Biodiversity, Ocean & Health. Dr Jaishankar participated in the Round Table discussion on “Security and Defence” where the EU announced the extension of the concept of a coordinated maritime presence in the north-west Indian Ocean. This will allow the EU to further support stability and security in the Indo-Pacific region, to optimise naval deployments, to promote coherence of European action and to facilitate the exchange of information and cooperation with partners in the Indo-Pacific, including by conducting joint maritime exercises and port calls.

On Digital issues, nine countries participating in the Forum (Australia, Comores, India, Japan, Mauritius, New Zealand, the Republic of Korea, Singapore, Sri Lanka) adopted the Joint Declaration on Privacy and the Protection of Personal Data , to foster and further develop international policy discussions and cooperation regarding data protection and cross-border data flows with trust, both bilaterally and multilaterally, in order to promote this shared vision and increase convergence amongst our data protection frameworks.

The Ministerial Forum for Cooperation in the Indo-Pacific was the first such opportunity for reflection and exchange and to build a common vision between the European Union, its Member States and the countries of the Indo-Pacific region, based on shared principles of a free, open and rules-based order.